From Developing Space
Jump to navigation Jump to search 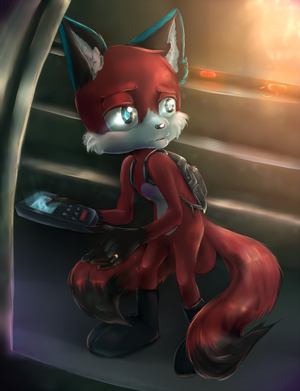 Commission of Joseph Watcher by https://crisisdragonfly.deviantart.com/

Joseph Watcher (previously known as Joseph Prower before a retcon) is the current Apprentice Steward of the Multition Default and is about 30 years old with Neon Red fur. He has, however, been alive for several thousand years, leading him to be a very wise person (see Age-Lock)(<–that isn’t posted yet…). For his standards, see https://www.comeuntochrist.org/. He is of patient, cool-headed type, which is kind-of required for his position.

Since he is often (hopefully) in other stories, he is generally forbidden from making any major changes, whether they be good or bad. He is allowed to give advice to both sides, as well as making small changes that cascade into larger ones.

As Multition Steward, he has a sizable collection of shells that permit him to be in multiple places at once.

He has an odd tendency to be unnecessarily verbose when asked to explain things. He will likely freak out if you hand him a problem he is allowed to solve but is unable to and he might likely become obsessed with trying to find the solution.

I will add to this later…

For behavior and appearance in Pokémon universes, see Joseph Watcher/Pokémon.

He has a tendency to use "Oi" in his speech.

Retrieved from "https://developingspace.miraheze.org/w/index.php?title=Joseph_Watcher&oldid=161"
Category:
Cookies help us deliver our services. By using our services, you agree to our use of cookies.